The Fox and The Crow - Process 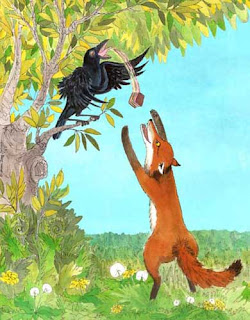 THE FOX AND THE CROW
© Diana Ting Delosh
Ink, watercolor and Photoshop
Decisions, questions and hopefully solutions are a part of my illustration process. As the above illo was my entry for a fun group project, CBIG AESOP'S FABLE Illustration Catalog, the first questions was which Fable. Easy enough something that featured things I like: animals, food, nature. Sure I could've also used this as a challenge to draw things I don't like but as I was already in the midst of juggling other deadlines why stress. I did say this was for fun. 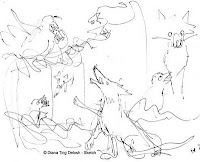 Decisions: the angle perspective of art - lot's of doodling. Decided to keep it simple as I wanted to show the goody falling from the crows mouth  as well as her "OOPs" expression and the triumphant glee in the fox's face and body. Also needed to decide on whether I was going the traditional route and illustrate cheese as the coveted food item. Some of the versions did not specify cheese so I thought I'd have some fun with it and do one of my favorite yummies, the rainbow cookie. Now that's a treat worthy of some cunning.  Ink in the foreground, main characters and paint. 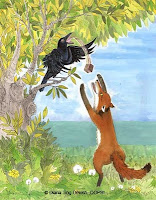 Background Quandaries: Keep it simple or do the whole forest. Usually I'm not this indecisive but this time, who knows, maybe it was the August heat. Couldn't decide and went back and forth during the sketch phase. Decided on simple and then second guessed myself by adding in the forest after I had painted the foreground. OOPS! Painted out the forest with Gouache. Just could not stop myself as I impulsively added just a few trees over to the extreme right.  Muddled it up again! My only excuse for this lapse in judgement was that I was juggling multiple projects and clearly muddle brained myself. Forgot a major rule in illustration: Keep what is important to the story in focus. Thank goodness for Photoshop. Deleted the offending background and replaced it with a sky I had painted for another project. Sigh!

And there you have it the story behind the illustration.


My Fox and Crow illustration is my entry for this years CBIG group project the CBIG AESOP'S FABLE Illustration Catalog. The pdf catalog may be viewed on the CBIG website and all 26 illustrations are showing on the CBIG blogzine from September 1st through October 31st, 2011. See my FOX AND THE CROW  - CBIG Blogzine - September 23, 2011.
Posted by Di at 10:57 PM 2 comments:

Wow it's been awhile since I posted on this blog. I've had a busy busy summer with assorted projects. Here, finally, for your viewing pleasure is one of them... the CBIG Aesop's Fables Illustration Catalog.  I'm also happy to be 1 of the 26 illustrators that participated in the CBIG second annual illustration catalog as well as the designer of this group effort. Please hop on over to the CBIG blogzine during the months of September and October 2011 where I'll be posting the illustrations from the catalog.