Bubble Trouble: From Idea to Publication.

I'm so happy to announce the publication of my poem, Bubble Trouble, in Highlights/High Five magazine, July 2008, pg 12 & 13 illustrated by Holli Conger. Yay!

If you're interested in the submission process - Read on. Bubble Trouble from idea to published poem took 4 submissions and 7 years. Note: there is more to my life between 2001 and 2008 than this 6 line poem but that's all I'm blogging about here.

I first thought up Bubble Trouble in 2001, scribbled down the rough draft and posted it on a corner of my drawing board. All the better to keep an eye on it while I worked on illustrations /graphic design assignments, other ideals, life, etc. Every now and then I'd tweak a word or line until it took pretty much the same form as it is today -a 6 line poem. I also thought it would make a cute rebus and created a double spread layout.

Submitted my BT poem & suggested sketch layout along with sample illustration and SASE to Ladybug magazine fall of 2001. Why Ladybug? Because they were publishing my In the Garden, illustration and counting activity. And I thought it was perfect for their readers aged 2 - 6. Waited - way past the 4 months they said it took to review & return submissions before finally sending a query. It is the spring of 2002 when I get a reply that they don't keep records of unsolicited subs but I may resubmit. I do. More months pass - finally my SASE comes back at the end of 2002- REJECTED! Albeit a personal rejection. They have a surplus of bubble submissions!

After some sulking, I revamp art for a single spread and submit to Highlights Magazine 2003. They do use rebuses but I still think it's a longshot. More months of waiting - but it does come back - form letter rejection. Well I did think it was a long shot.

BT submitted to Turtle magazine July 2003 and is rejected that December. I sulk, indulge in massive quantities of chocolate, file it away.

2006/2007 - I read in my newsletters: Children's Book Insider and Children's Writer that HighLights will be coming out with a new publication. High Five magazine will be aimed at 2 - 6 year olds. I make a note to myself to submit art samples and maybe create a proposal. One day it dawns on me that I have a perfect project for them in my files. BT is: reviewed, tweaked and submitted July 2007. September 4,2007, my sketches are returned but they are interested in publishing my poem. I'm a bit surprised as I always thought that my art sold my writing but I accept. A month later, the editors send me edited copy to review and a publication date of July 2008!
Posted by Di at 12:02 PM 2 comments: 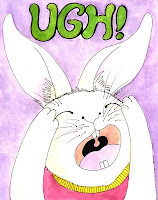 It's been 7 months, 3 submission status queries and no response/no dummy/nothing. Yup - IT'S BEEN LONG ENOUGH. I can now file my picture book dummy/manuscript submission, UGH!, officially under lost/rejected. It was a requested submission so I was assured it would be returned in my S.A.S.E. But I guess not. It takes 5 hours to make my dummies. Which is why I try and be careful where/to whom I'm subbing. But mistakes do happen. This is most frustrating. I hate that many book publishers have switched to this policy of only replying if they are interested. I preferred the form rejection note. At least they returned your work!

On the otherhand it may not even be the publisher's fault. A friend of mine reported that a dummy, that he assumed had been trashed was returned to him by the postmaster with a note saying that it had separated from the envelope and they were sending it to the address on the business card pasted in the front of the book. The package had made it to his local postoffice, where the postal machines chewed up the envelope and spit the dummy out on the floor. Months later - the dummy was found and luckily they saw the business card pasted into the front of the dummy. Hurrah for the USPS for trying.

So what's there to do? Grumble grumble -some teeth nashing - vent & whine. I can't even have the satisfaction of OD-ing on chocolate as it's not even a real rejection. Oh well - I guess I'll just whip out the duplicate dummy and sub it to this place that still returns submissions via S.A.S.E. and hope nothing goes wrong. I'll take a clear cut rejection anyday over as I haven't received a reply I assume it's rejected.
Posted by Di at 2:52 PM No comments: 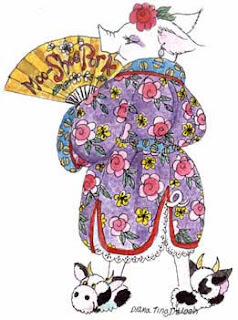 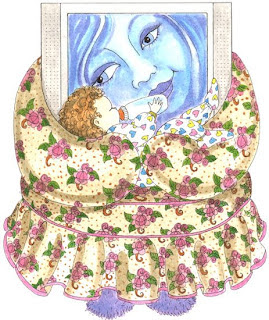 
This is my entry for Illustration Friday's word of the week - BABY. It is my attempt at an editorial illustration. I had been reading and hearing on the news about how babies were viewing more and more TV.

My current illustration portfolio is geared towards children's publishing. I'd like to expand my repetoire. Have a few more tricks in my bag and be viable to more markets. Any suggestions, comments, hints would be appreciated.
Posted by Di at 12:41 PM 2 comments: