Welcome to my blog , The Hare Illustratère. I'll be posting about my art process and journey as an illustrator/author here.

It's ALL about Time 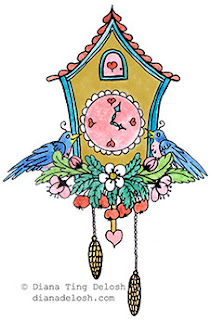 I'm taking the period between January 1st and the start of the Year of the Rabbit, January 22nd to think about what I want to happen in the coming year and what I need to do to make it happen. As I was making my lists for all the facets of my life I realized that all this list making was an exercise in futility. If I didn't get a handle on my time, nothing would change from this year to the next.

Now I've never been good with time. My priority was based on If I don't do it now:

• Is it a matter of life or death?

• Will I cause pain or suffering?

• Is it commissioned work?

• Does it have a hard deadline?

• Will it effect me/us financially?

Everything else could go to the back of the line and be taken care of in due time. For the longest time this system sort of worked at least until the Pandemic hit mid-March 2020. I don't know about you but since then I've been plagued by a case of bad timing probably caused by too many pajama days sprinkled with too many days of uncertainty. So the last 3 years, I felt like I've been running around putting out fires. Still, I'm happy to report that the only thing I killed was a houseplant or two.

While last year was definitely better as I seemed to gain some of my old speed back with creative and commissioned work, everything else was like slogging through molasses. Weeks speeded up as my to do list piled on. So what do I plan on doing differently now that I've decided to be serious about my time management problem? For starters, I've decided to log my time. This way I can see how long a task actually takes as well as where I'm wasting it.

So far I've discovered (been doing this for a week):

1 - The weekly bills, a task I hate and dread and stress over and would always procrastinate before actually beginning, only takes an hour. Only one hour. Meanwhile I killed 2 hours not doing it.

2 - I can cram a lot of creative work into the last hour of the day because I suddenly realize that if I don't start it now it will be another day that I'm mad at myself for not getting to it.

3 - Keeping track of my time helps me to use my time more intentionally.

4 - I will still have days where I'm totally off.

They say it takes 90 days for something to become a habit. I'm taking it 1 month at a time.