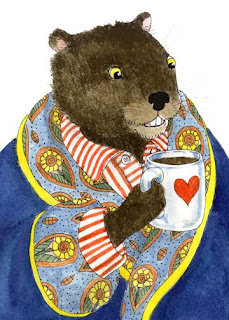 Groundhog Awakes!
© Diana Ting Delosh
ink & watercolor
It's been so brutally cold and snowy this winter that I want to believe in the power of groundhogs. According to news reports, Puxatawny Phil did not see his shadow which means spring will come early. YAY! Happy February 2nd -Groundhog's Day!

Tomorrow February 3rd is the start of Chinese New Year, The Year of the Rabbit. To celebrate I'll attempt to post a  rabbit illustration a day for the first 2 - weeks of the Chinese New Year. Having 14 bunny illos isn't a problem - after all I am the the Hare - it's the daily posting that may bamboozle me. That and the fact that I'll be on call for jury duty for part of this period. I guess I better plan ahead to post.

Fellow artists: I hope you'll join me by posting your own bunny images on your respective blogs. Let's make it a Hoppy 2011.
Posted by Di at 5:26 PM